Geonics provides the manufacturer’s recommendations for using an EM61. The U.S. Army Engineering and Support Center USAESCH has defined its own standard equipment tests and data quality requirements for its Ordnance and Explosives – Digital Geophysical Mapping (OE-DGM) contractors. These functionality tests are similar but have subtle but important differences.

Both guidelines have a number of tests in common. Before performing any test, power up the EM61 for a minimum of five minutes to eliminate any instrument drift and establish consistent equipment readings. Geonics and the Army suggest conducting a Personal Test to establish any metal on the operator, thereby allowing the operator to eliminate any object that distorts the EM61’s readings. According to the Army, the EM61 readings during the Personal Test should vary less than +/- 2 mV. Geonics, on the other hand, gives no absolute number for the acceptable variance. After conducting the Personal Test, Geonics and the Army test for broken and shorted cables by shaking the cables and looking for spikes in the data. 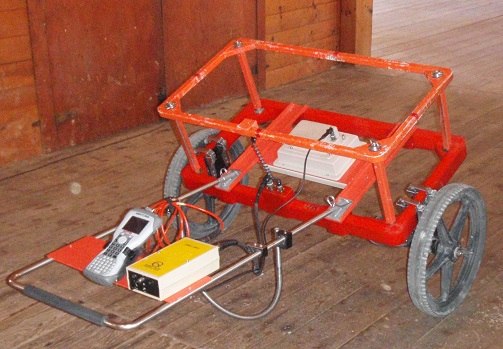 A Static Background Test to establish if the EM61 is taking consistent stable readings is required by both quality control guidelines. After warming up, Geonics stresses that there should be less than a 20mV deviation in the EM61’s readings. Conversely, the Army has much tighter restrictions holding the standard deviation to +/- 2.5 mV. However, when it comes to the Static Response Test, which measures the amplitude of the response of a standard test item, Geonics standard is much tighter, requiring less than 5% deviation from test to test while the Army considers less than 20% deviation to be acceptable.

The Six Line Test measures heading effects, response amplitude, positional accuracy, and latency along a line with a standard test item. Basically, the EM61 travels along the line at different directions and speeds and measures the varying effects on the data collected. Geonics does not specify what data is acceptable; however, the Army suggests that the response stay within +/- 20% and the positional accuracy must be within 35cm. Likewise, a Repeat Test is suggested by both quality control guidelines to test repeat data. Geonics requires the Repeat Data for gridded surveys to be within 5% for consistent data. The army requires a similar test for both gridded surveys and path surveys. As you can see, many of the test among Geonics and the Army are the same yet the required response ranges and disparities are different.

The Geonics and Army quality control guidelines each contain some exclusive tests. Geonics suggests performing a Pull Away Test that measures the effect that navigational equipment and towing equipment has on the EM61’s readings. This might be particularly important when using a GPS backpack or a vehicle to pull the EM61. The Army’s quality control contains tests that do not apply to the EM61 such as the Azmuthal Test and Octant Heading Test because their guidelines apply to magnetic as well as electromagnetic metal detectors.