How deep can Geonics equipment explore?

That depends on what piece of equipment the user is using.

The maximum exploration depth of Geonics equipment that measures ground conductivity and magnetic susceptibility, such as the EM-31, EM-38, and EM-34, is dependent on the selected intercoil spacing and orientation of the coils. In other words, the distance between the transmitter and receiver and if the measured response reflects a horizontal or vertical dipole determines the depth of exploration. Like most electrical methods, the type of subsurface material and the stratigraphy plays an important role. Geonics Technical Note TN-6 covers this topic in great detail (or view it here TN6 EM at Low Induction Numbers). Last but not least, an operator should be aware that the vertical dipole mode is less sensitive to surface material than the horizontal dipole mode, see figure of relative resp0nse curves. 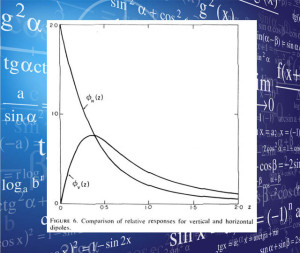 The accumulative response of the EM31 with an intercoil spacing  of 3.7 meters

The EM38 has one transmitter coil and two selectable receiver coils.

The EM34 has two large coils connected with flexible cable that are spaced by a team of two people.

You may have noticed a relationship when looking at the intercoil spacing and the exploration depth of Geonics equipment.

Geonics EM61-MK2 is different than the instruments

above in that it is time domain metal detector for ferrous and non-ferrous metals. As demonstrated in the Geonics figure, its depth range is largely depend on the target’s size and orientation. Larger objects can be detected at great depths than smaller objects. If there are two objects of the same size, the object that reveals more surface area square to the EM61 will produce a greater response and be detected at a greater depth. 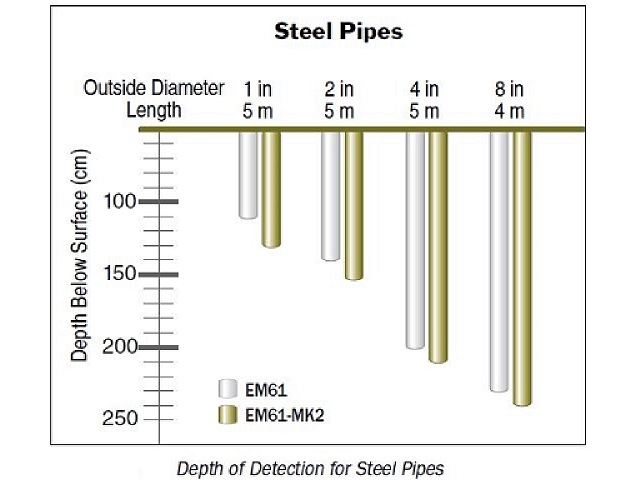 As with any instrument, conditions will affect an instrument’s effectiveness. Soils that are not very conductive do not work well in conjunction with electromagnetic instruments. Therefore, soil can be a limiting factor in the depth of detection. Likewise, areas with a great amount of electromagnetic noise will make the weaker responses harder or impossible to detect.

Geonics EM-38 Continuous Readings With GPS and Convert to UTM
What is EM-61 noise?