You are here: Home › EM61 detection of ferrous and nonferrous metals
By geonicstraining on September 18, 2021 in FAQ, Geonics EM-61, Geonics Training, How It Works

Once the transmitter no longer produces a current / primary magnetic field, the metal target’s current is a monotonically decaying waveform. The maximum amplitude of the waveform and the duration of the transient current are determined by the target’s size, position relative to the EM61 coils, and electrical properties. As the current disappears so does the secondary magnetic field.

With that being said, target with more mass, regardless of metal type, will always have a stronger response than the same metal type with a lower mass. Additionally, targets of the same type and size may have different responses depending on the orientation of the material. Larger surface areas in relation to the EM61’s coils will provide larger responses. 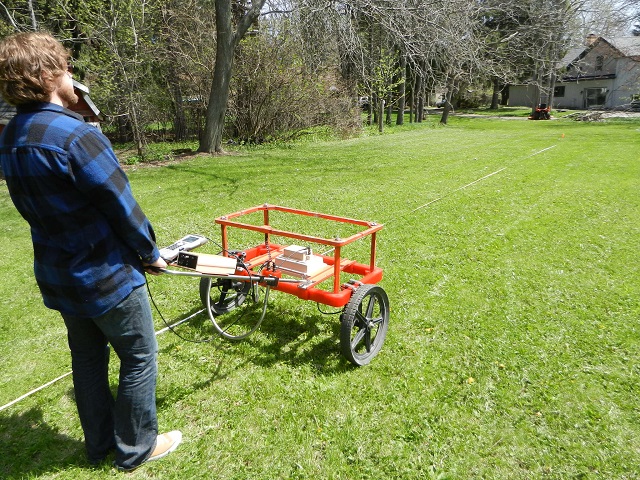 If you ever looked at the EM61, you may have noticed the handle and pins are metal! How does this not affect the accuracy of the EM61? Didn’t you just explain the that both ferrous and nonferrous metals are susceptible to EM61 detection? Well, I tried to. Think about why the handles may not affect the EM61 readings!

The type of stainless steel used throughout the EM61 construction possesses little magnetic permeability, meaning that the magnetic field dissipates before there a response is recorded. Remember the EM61 transmitter coils wait until the transmitter coil is not producing current to record a response. Furthermore, the size and relative surface area in relation to the EM61’s coils is not large enough to warrant a response given its already subpar qualities for being detected by the instrument.

Geonics Training .com would like to acknowledge and thank Mike Catalano and Geonics for providing the necessary information to answer .

Why won’t my EM61 files open on the DAT61MK2 program?
Why does my Geonics EM31 only shows negative conductivity values?