You are here: Home › What is EM-61 noise?
By geonicstraining on June 13, 2013 in FAQ, Geonics EM-61, Geonics Training, Troubleshooting

There are four different kinds of EM-61 Noise.

Determining the source of noise is important because a target response can only be established when the response is greater than the background noise.

The EM-61 was made by design to have little instrument noise. However, the instrument itself is not noise free. A well calibrated and maintained EM-61 produces readings between 1 and 1.5mV

Nearby utilities, motors, radios, generators, radar, GPS, and other electrical or electromagnetic devices can cause disturbances in the magnetic field which create background noise. If EM-61 readings are displaying large variances, there might be ambient noise that the user is unaware of. This is common when EM-61s are taken to a military base because often the operator does not think about the amount of ambient noise produced by radar. 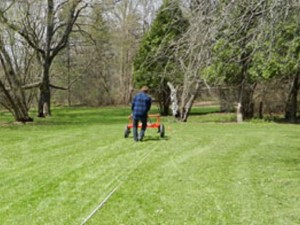 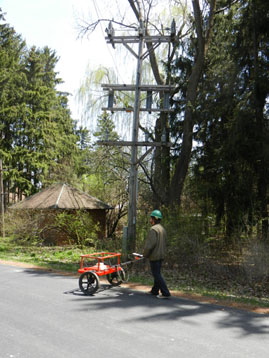 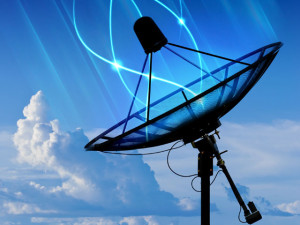 If the user suspects that ambient noise is affecting the EM-61, the user should take the equipment a few miles away and turn it on again to perform a Static Background check. Did the move in location change the amount of background noise? 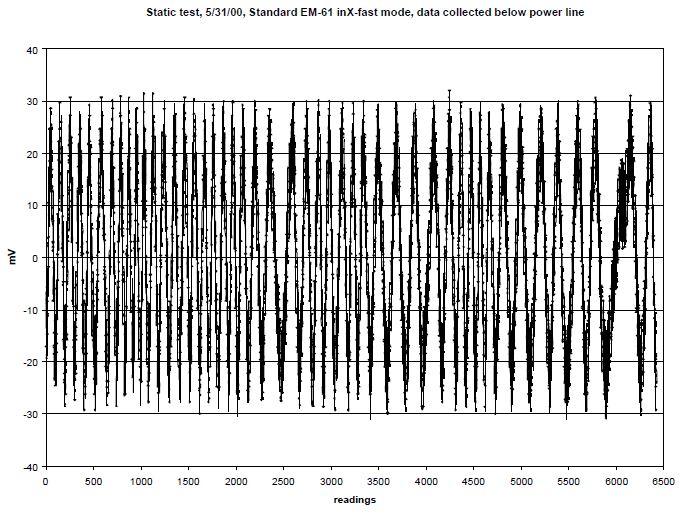 Ambient Noise from a Power Line

Mechanical vibration of the EM-61 or metal on the operator/instrument may cause motional noise (visit Wikipedia for examples). Likewise, varying the the EM-61’s coil orientation while surveying can trigger a high frequency sinusoidal response that makes it harder to identify smaller targets. This can happen because varying the instruments sensors can alter how the equipment couples with the earth’s magnetic field. 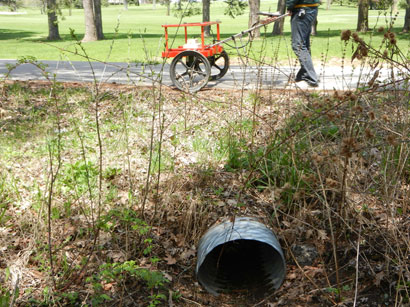 Terrain noise is a real and repeatable instrument response to highly magnetic rocks, soil, and metal clutter. These response are caused by objects in or around the ground. Terrain noise is usually the most common noise encountered during geophysical investigations and it can be a limiting factor in response detection and interpretation.

Atypical variations such as responses with very short wavelength or very long wavelength noise can be suppressed by filtering. However, terrain noise presents responses that are very similar to target responses and therefore cannot be removed by spatial filtering.

The Static Bench Tests measure the sum of instrument and ambient noise (and also instrument drift). Dynamic tests such as the Repeat Data Test along an actual survey line are necessary in order to measure motional and terrain noise. The placement of one or more calibration objects permits evaluation of amplitude response. A repeated dynamic test survey line also measures positional variation.

What is the maximum exploration depth of Geonics equipment?
Why won’t my EM-31 files open on the DAT31 program?